Hi! I'm a student of Ramakrishna Mission Residential College, Narendrapur, pursuing an honours course in Computer Science. Music and photography are my hobbies. This blog contains snippets of my life's experiences from 2012.

It’s been 6 months since I took admission into Ramakrishna Mission Residential College (RKMRC), Narendrapur. My life in RKMRC is beautiful! This post will be about RKMRC.

I’m studying computer science. The faculty of this department is fantastic. I had one singular computer science teacher in my school life whom I deeply respected. I never expected to get teachers like her in my college life.

The three teachers who are professors of the computer science department of RKMRC are the sole reason who make each new day in college exciting.

As a resident of Ramakrishnananda Bhavan

Each room in our hostel buildings has four students residing together. I am extremely lucky. I have a fantastic peer group in Narendrapur! Not just my three roommates. We share the same ‘wavelength’ – the students living in the adjacent room, and a few students from rooms adjacent to it. I can be free with them. We talk for hours on end and never tire out. I never present a modified form of myself in front of them.

1st year students of RKMRC obtain something from the first day of hostel and college – amazing seniors! They welcomed us on the first day at hostel like old acquaintances.

Colleges my school friends had taken admission into, had freshers’ welcome ceremonies with unique themes. We had an oath taking day, a month from the day our college commenced – the ‘vidyarthi brata‘.

We hadn’t expected much initially. However, it was a very peaceful and serene experience. Along with that, delicious food was served during the afternoon 😀

The most common question that people ask me is

Yes. We have a morning and an evening prayer. But it is not painful or imposing. The evening prayer, especially, has a calming effect after we return from college. The prayers start with a প্রারথনা সঙ্গীত(prayer song). Following that, a student reads out from কথামৃত (Kathamrita) and other similar texts. Finally, we meditate and practice প্রাণায়াম (pranyama). This rejuvenates us.

In the month of September, we had our college fest – ‘Uttishthata‘. This was a very unique event, and one I thoroughly enjoyed. Uttishthata comprised of three days – the first day had ‘HaJaBaRaLa‘, the second day, a drama competition among the three Bhavans, and, on the last day, a magic show presented by a student of noted magician P. C. Sorcar.

‘HaJaBaRaLa’ was a medley of quiz, creating stories, extempore, and more. It consisted of three teams, one from each bhavan.

The drama still plays in my head. The concepts transcended our expectations, and everything – the stories, the scripts, the stagecraft – had been conceptualized and realized by the students of RKMRC. I was stunned by the three plays!

About the flow of time 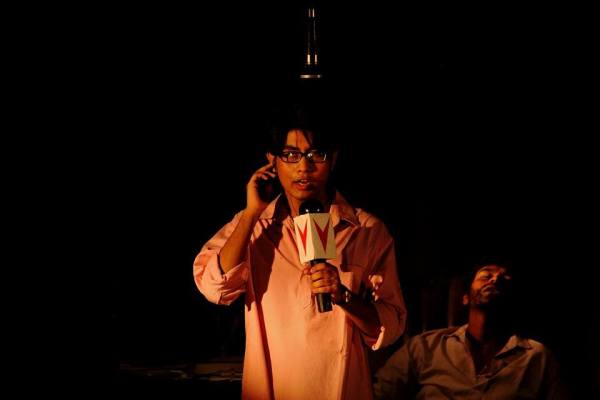 The hangover of these three magnificent plays lasted for days. The presentation had been of a different class…

RKMRC boasts a huge green-field. Almost everyone who visits the the field for the first time gets amazed by its size. And on one side of the field is located a stadium – another feature that surprises new comers.

It really is a pleasure to study in an environment like ours. Tranquility and natural beauty encompasses the whole 180 acre campus. The numerous facilities – the huge fields, a full size swimming pool, a central library with almost 60,000 books and numerous journals, two gymnasiums, indoor games – always keep us engaged. Life never gets boring in Ramakrishna Mission, Narendrapur. Personally, the beauty is enough to keep me inside the campus for long periods of time.

The latest development in our college: we will soon be harnessing solar power. The entire college building rooftop has been covered with solar panels and some are claiming that enough power will be produced to run the college building and the three hostel buildings!

Initially, before I had taken admission into this college, I had dreamt of  studying in St. Xavier’s college. When I found out my board examination marks were not adequate for computer science, I had been terribly disappointed. It meant that I would have to study in Scottish Church college, or RKMRC (yes, initially, my hopes weren’t so high, especially because I would be living in a hostel for the first time).

After having spent 6 months in RKMRC, I thank God from the core of my heart that He directed me towards this college. I am a proud student of Ramakrishna Mission Residential College.

This site uses Akismet to reduce spam. Learn how your comment data is processed.